Trina Ganson received her diploma of fine arts from Okanagan University College in 2005.  Shortly after, she moved to Vancouver, British Columbia, where she became an active member of Malaspina Printmakers Studio on Granville Island. 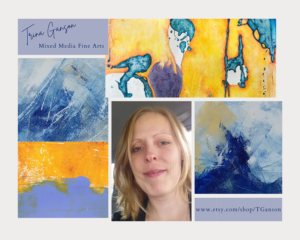 A number of years later Trina returned to the Okanagan to finish her Bachelors of Fine Arts.  In 2008, after she had graduated from the University of British Columbia, Trina along with three other artists started an artist coop and gallery known as Studio 113 in the Rotary Centre for the Arts located in Kelowna BCs cultural district.

During the spring of 2018 Trina and her family relocated to Ontario, where she continues to practice printmaking and book binding.